We all love Traditional Pork Scratchings

We all love the traditional ‘Pork crackling’ – the salted crunchy pork rind produced when roasting a joint of pork. This is created when the heat of the oven causes the fatty pork skin to dry, bubble up and become crunchy.

But how did this evolve into the seasoned pork scratchings we enjoy as a snack today?

Pork Scratchings have been popular in the UK and especially in the Black Country since the times when families would fatten up a “tunky pig” (a pig fattened-up especially for Christmas), then slaughter it for meat and slice the skin with the fat into strips which they would then deep fry.

Some believe that their popularity grew in the early 19th century when new uses were found for offcuts from pigs and to ensure nothing would be wasted. Then in the early 20th Century enterprising butchers would produce and sell their own scratchings in tie-bags. The rest, as they say, is history.

Pork scratchings are typically slightly hard to the bite, have a crispy layer of fat under the skin, and are flavoured with a salty seasoning.

‘Pork scratchings’ is the British name for deep fried seasoned crunchy pork rind, however, pork scratchings aren’t just a Black Country phenomenon but are also enjoyed the world over.

Known in the USA as ‘Cracklings’ or ‘Pork Rinds’, Canadians call them ‘Scrunchions’ and often use them as a flavouring over other foods such as salt fish and potatoes.

Eaten throughout Europe too, known as Grattons in France and Chicharrones in Spain.

Also eaten as far apart as from Latin America to the Philippines and in China they are considered to have medicinal qualities; good for the cardiovascular and cerebro-vascular systems and reputed to improve the skins moisture levels. 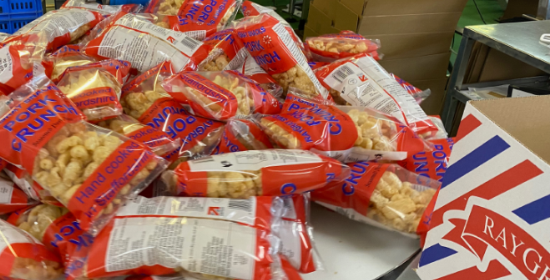 Over recent years pork scratchings have been considered as an alternative snack food due to the Atkins Diet, since pork rinds contain no carbohydrates (unless flavoured). Scratchings have a fat content similar to that of crisps.

A major distinction is that the fat in pork scratchings primarily originates from the pork, while the fat in crisps typically comes from manufactured vegetable oil, with correspondingly different essential fatty acid content.

For example, if we compare a 25gram serving of RayGray Pork Scratchings with a 25g packet of crisps they both have approximately 12g of fat, however the packet of crisps will only have 1.5g of protein compared to the pork scratchings which generally contain 11g of protein, more than most foods except dried meats such as beef jerky. 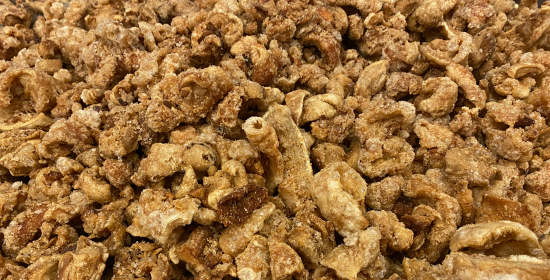 According to an article in Mens Health

A 25g packet of scratchings typically contains almost no carbohydrates, 11g of protein, and 12g fat. That’s six times the protein levels for similar fat content in a serving of carb-packed crisps.

Even better, 43 percent of a pork rind’s fat is unsaturated, and most of that is oleic acid — the same healthy fat found in olive oil. Another 13 percent of its fat content is stearic acid, a type of saturated fat that’s considered harmless, because it doesn’t raise cholesterol levels.

A Global delicacy to the Stars!

Pork Scratchings or Crackling have become the ‘snack du jour’ in the smarter bars of London and New York, enjoyed by the likes of Beyonce Knowles and Kate Moss. Pub landlord Al Murray and presenter Chris Evans are also well documented fans. 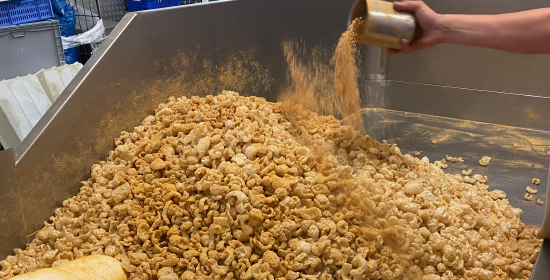 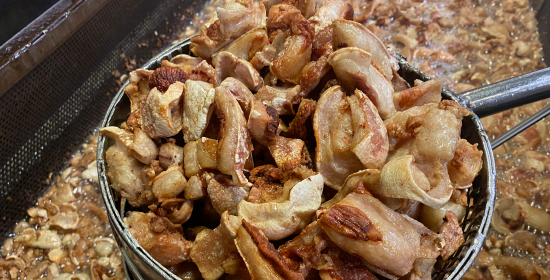